Molecular orbital treatment of benzene
This is the most accurate concept of the structure of benzene. The structure of benzene molecule is best described in terms of molecular orbital treatment theory.
According to this theory, all the C-atoms in benzene are sp2-hybridized. Two sp2-hybrid orbitals of each C-atom overlap with two sp2-hybrid orbital of two other C-atoms to form sigma bonds. In this way there are six sigma bonds are formed between six C-atoms which are 120o apart. Remaining six sp2-orbital of six C-atoms overlap with 1s orbital of six H-atoms individually to form six sigma bonds. Since sigma bond results from the overlap of above said planar orbital, all H and C atoms are in the same plane and there generate a hexagonal ring of C-atoms. 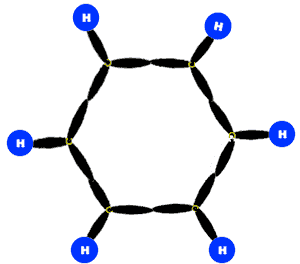 Each C-atom in benzene also has an unhybrid 2pz-orbital containing one electron. These 2pz-orbital are perpendicular to the plane of sigma bonds.
Pz orbital in benzene 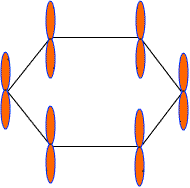 These 2pz-orbitals by lateral overlapping form three alternate pi-bonds in benzene ring. There are two possibilities of pi-bond formation in benzene. 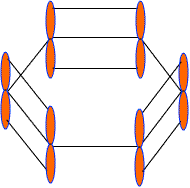 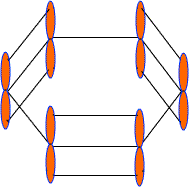 Actually these 2pz-orbital produce a pi-molecular orbital containing six electrons. One half of this pi- molecular orbital lies above the plane of hexagonal ring and remaining half below the ring like a sandwich. 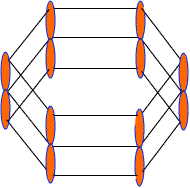 The overlap of these 2pz-orbital result in the formation of a fully delocalized pi-bond, which extends all over the six C-atoms of benzene nucleus. The molecular orbital approach clearly indicates that these six electrons could be found anywhere in highly delocalized manner. As a result of delocalization, a stronger pi-bond and a more stable benzene molecule is obtained which undergo substitution reactions more frequently than addition reactions. 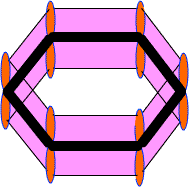 Bond length analysis in benzene
C-C length in alkane = 1.54oA
C=C length in alkene = 1.34oA
But in benzene,
C-C length = 1.397oA
C=C length = 1.397oA
This shows that in benzene single and double bonds have quite extraordinary character as they do not resemble to alkane and alkene in bond lengths.
That is why benzene shows a behavior of saturated as well as an unsaturated hydrocarbon simultaneously.

Modern representation of benzene
With the help of molecular orbital behavior we conclude that benzene has:

Q: Write a note on the stability of benzene ring.

A: In benzene ring pi-molecular orbital is in a state of vibration due to this vibration resonance is produced. The stability of benzene ring is due to resonance energy of the system. The resonance energy is the difference in energy content of benzene compared with that of a formal written structure. The Kekule’s structure requires localization of 2p-electrons as specific pi-bonds alternately between particular C-atoms. The actual resonance hybrid structure has these electrons delocalized spread over the whole ring. Hence, pi-electrons of benzene are not readily available at particular positions as in alkenes, and so do not assist the attack of a weak electrophile in the same way as in alkenes. On the other hand the reactivity of benzene ring is also affected by the presence of annular pi-electronic cloud which acts as a repelling shield to any nucleophile attack. Thus, electrophilic substitution is more common in benzene but for a powerful electrophile reagent.

Functions of an Office

Concept of an office