All hydrogen atoms of the benzene ring are equivalent. Therefore, when a group enters into the benzene ring, only one monosubstituted product (C6H5-G) is possible as described below: 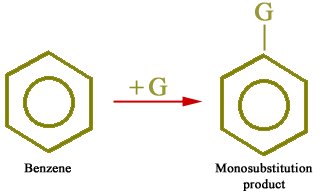 Problem starts when another group (E+) or second substituent enters into monosubstituted benzene and it can occupy any one of the remaining five positions as shown below: But which one of the five positions the new group will occupy??? Let us discuss the exact possibility.

Activity effect
The substituent already present may activate or deactivate the benzene ring towards further substitution. These effects are called the activity effects.

Directive effects of substituents
In monosubstituted benzene, C6H5-G, there are five hydrogen atoms.
Ortho = 2 positions
Meta = 2 positions
Para = 1 position
But, this distribution is never obtained. The products formed, in fact, is determined by the nature of the first substituent already present on the ring.

Does a ship sink more in river water or in sea water? Explain.

What are centre of buoyancy and metacentre?

Steel balls sink in water but they don’t sink in mercury. Why?

A body is moving in a circular path with constant speed. Is this motion a simple harmonic?