This theory can be explained with the help of table and figure as following:

In the above table, wage fund raised is Rs 1, 00, 00,000. When the number of workers employed is increased from 50000 to 100000 and 150000 the wage level is decreased from Rs 200 to Rs 100 and Rs 66.67 respectively. It is due to constant wage fund distributed among more workers. If we represent wage level with respect to number of workers employed we obtain a convex curve. 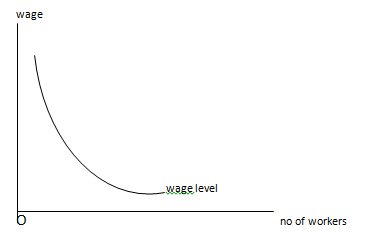 In the above figure, the downward sloped convex curve represents inverse relationship between wage level and no of workers employed.

Nature and Characteristics of Planning