“During any process total energy of a system and its surroundings is constant.”
Or
“It is impossible to construct a machine which performs work
continuously with taking energy from an external source.”
Or
“Energy can neither be created nor destroyed but it can be
converted from one form of energy to another form of energy.”

Mathematical representation
Let a system absorbs DQ amount of heat energy. Addition of heat energy increases the internal energy of system from U1 to U2 and some useful work is also performed by the system.
Increase in internal energy is given by:
DU = U1 – U2
and
work done is DW
According to the first law of thermodynamics:
DQ = DU+ DW

Isobaric process
A thermodynamic process in which pressure of the system remains constant during the supply of heat is called an isobaric process. Let the initial volume of the system is V1 and initial internal energy is U1. Let DQP the gas is heated from

Graphical representation
Graph between P & V for an isobaric process is a straight line which is parallel to V-axis. 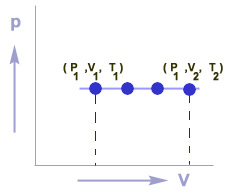 Advantages of first law of thermodynamics:

Disadvantages of first law of thermodynamics:

Types and means of business communication