Any plane surface which makes an angle q with the horizontal surface is called inclined plane such that0<q <90. . Inclined plane is an example of simple machine which is used to lift heavy bodies without applying very huge force.

Motion of a body on an inclined plane

Consider a block of mass “m” placed on an inclined plane, which makes an angle q with the horizontal plane. The weight “W” of the block is acting vertically downward. The weight of the block can be resolved into two rectangular components: wcosq and wsinq

other forces acting on the block are:

Let us take x-axis perpendicular to the inclined plane. If the block is at rest, then wsinq acting down the plane balances the opposing frictional force. 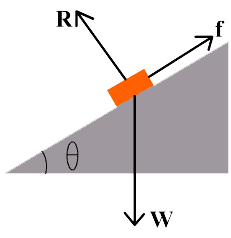 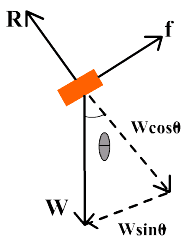 Since there is no motion in the direction perpendicular to the inclined plane, therefore wcosq is balanced by R i.e. R = wcosq
If block slides down with an acceleration equal to ‘a’, then the resultant force is equal to ‘ma’ and the force on block will be:
wsinq – f
According to 2nd law of motion
wsinq – f = ma
If the force of friction is negligible, then
wsinq = ma
but w = mg

This expression shows that if friction is negligible the acceleration of a body on an inclined plane is independent of mass but is directly proportional to sinq.

When friction is not negligible

Above analysis shows that the acceleration of a body on an inclined plane depends upon the angle of inclination.

Factors to be considered while selecting office machines and furniture