Physical quantities having both magnitude and direction
with appropriate unit are known as vector quantities.

We can’t specify a vector quantity without mention of direction.
vector quantities are expressed by using bold letters with arrow sign such as:

On paper vector quantities are represented by a straight line with arrow head pointing the direction of vector or terminal point of vector.

A vector quantity is first transformed into a suitable scale and then a line is drawn with the help of the scale chosen in the given direction. 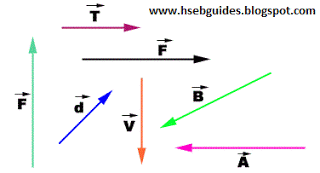