Explanation
Consider a cylinder fitted with a frictionless piston. An ideal gas is enclosed in the cylinder. The piston is fixed at a particular position so that the volume of cylinder remains constant during the supply of heat.
Let DQ amount of heat is added to the system. Addition of heat causes the following changes in the system: According to the first law of thermodynamics:
DQ = DU+ DW
But DW = PDV
Thus,
DQ = DU+ PDV As
DV = 0
DQ = DU+ P (0)
DQ = DU
This expression indicates that the heat supplied under isochoric process is consumed in increasing the internal energy of the system but no work is performed.

Graphical representation
Graph between P & V for an isochoric process is a straight line which is parallel to P-axis. 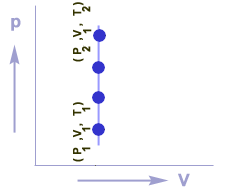 What Happens To The Vapour Pressure Of A Solvent, When Non Volatile Solute Particles Are Dissolved In It?

Define Aqueous Tension. Why Is It Subtracted From The Total Pressure To Determine The Pressure Of A Dry Gas?