Forces acting on the bob

The weight of the bob can be resolved into two rectangular components:

Since there is no motion along the string, therefore, the component Wcosq must balance tension (T)
i.e. Wcosq = T
This shows that only Wsinq is the net force which is responsible for the acceleration in the bob of pendulum.
According to Newton’s second law of motion Wsinq will be equal to m x a
i.e. Wsinq = m a
Since Wsinq is towards the mean position, therefore, it must have a negative sign.
i.e. m a = – Wsinq
But W = mg
m a = – mgsinq
a = – gsinq
In our assumption q is very small because displacement is small, in this condition we can take sinq = q
Hence, a = – gq ———– (1)
If x be the linear displacement of the bob from its mean position, then from figure, the length of arc AB is nearly equal to x
From elementary geometry we know that: 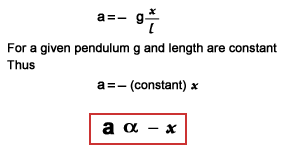