Aim: To determine refractive index of the material of the given prism by the method of i-d curve.

Procedure: We can divide the entire procedure of this experiment in to two parts: Then two pins are fixed on one of the lines at points P and Q. Looking through the face AB two more pins are fixed at the points R and S so that the reflective images of the pins at P an Q lie in the same straight line with these two pins without any parallax error. Now join the points R and S using a scale .The RS line represents the reflected ray of PQ. In the same way repeat the procedure on the other face of the prism AC, to get the reflected images G,H of the incident ray passing through EF. Remove the prism and extend the st.lines passing through RS and GH in to triangle ABC so that they meet at a point O.
Measure the angle ROG which will be equal to 2A
Hence angle{A} = frac{angle{ROG}}{2}

Part 2: Determine the angle of minimum deviation angle{D_m}:Fix the drawing sheet on the drawing board using drawing pins, keep the prism on the paper and trace the prism. The trace will give us a triangle ABC. AB reflecting surface , AC refracting surface and BC is the base of the prism.Draw a normal line MN to the reflecting surface at N.Draw a incident line PQ making some angle (>30degrees) with the normal line MN.Now place the prism on its trace along ABC.Fix two pins on the incident ray at two points P and Q .Now observing through the face AC two pins S and U are fixed so that these two pins at S and U will be in the line with P and Q.Remove the prism join the points S and U with a st line which meets the face AC at R.Extend the incident ray PQ forward and emergent ray SU backwards till the meet at O.
Measure the angle{TOR}=d.
repeat the experiment in the above said procedure for various angles of incidences i.e 35,40,45,50,55 ……. and measure the respective angles of deviations d1,d2,d3,d4,d5….. record these values in the table. 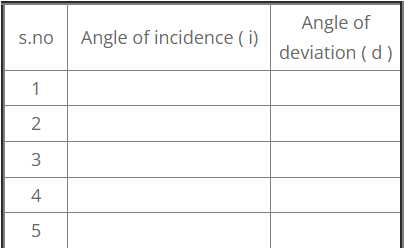 i-d curve: Now draw a graph taking the angles of incidences(i) on X-axis and the angles of deviations(d) on the Y-axis.join these points with a smooth curve which will be a parabola. From the graph the angle of minimum deviation can be calculated.

Result: Refractive index of the material of the prism