Hess’s law of constant heat summation states, “The total amount of heat involved in a physic-chemical process is same whether the process is done in single step or multiple steps involving intermediates.”

A can be converted to B into two ways:

Method I: A I directly converted to B

Method II: A is first converted to C, then to D and finally to B 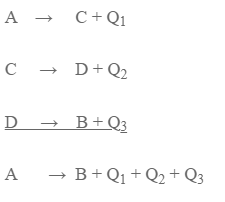 According to Hess’s Law,

This law can be verified by taking the conversion of carbon to carbon dioxide.

Method I: Carbon is directly oxidized to carbon dioxide.

Method II: Carbon is first converted to carbon monoxide and then to carbon dioxide.

Application of Law of diminishing return especially in agriculture

The Laws of returns to scale

Once unpublished, this post will become invisible to the public and only accessible to Chemistry 12 Notes.