The optimum population, however, is not fixed, for over a period of time. Conditions are liable to change. If it were possible to increase the supply of other factors with increase in population, the optimum might be raised. Optimum population is relative to resources and technology. So if there is increase in capital stock or natural resources or level of technology. There will be an upward shift in the average and marginal product curves. The per capita output will increase. This means that the level of optimum population too will increase. This has been represented in figure below: 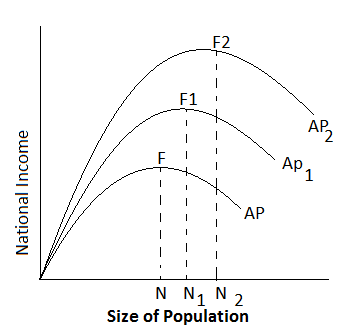 Dalton has given a formula to measure the extent to which the actual population of a country deviates from the optimum population. The extent of deviation is called maladjustment