It is not that only Number of people living in a country can determine whether or not a country is under or over populated. The population of a place can be sufficient to utilize the resources of a particular place but can be over or under to another. Labor is required for The production of a commodity and therefore there is need of proportionate use of labor with response to resources available to control the over and under the use of natural, capital, physical and economical sources. Hence, according to J.L. Hanson “The amount of labor which, combined with the other factors of production, yields the maximum output is the optimum population for that particular country”. Optimum population is number of population that a country should have with respect to its resources. When a country’s population is neither too big nor too small but just that much which the country has, it is called optimum population. Hence, the optimum population can be defined as the one on which output per capita is highest.

When population is below optimum level, it is the case of under population. The number of people is insufficient for the utilization of natural and capital resources. Under such situation, the increase in population will lead to increase in output per capita. Increase in population increases labor force and thus division of labor will be possible and then there will be proper utilization of resources. The market for product will increase. Finally, the point is reached at which the output per capita is the highest.

If the population of a country is over optimum level, it is the case of over population. Condition may arise when country can be not rich in natural and capital resources but is economically over-populated, although in terms of numbers its population is small. The resources available will be insufficient to provide employment to all. The output per capita will diminish. Standard of living will fall. 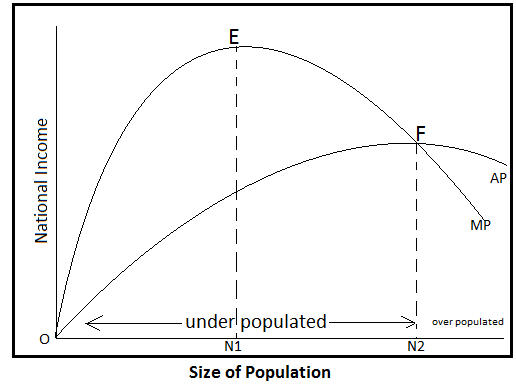 Magnetic Field Due To Toroid