It is also known as Main memory/System memory/Internal memory. It is a semi-conductor memory. It is used for storing data, programs while they are being used in a computer. It is the only memory which is directly accessible to CPU. It is usually faster for read/write, expensive and used in smaller capacity compared to secondary memory. The different primary memory used are:

1. RAM
It stands for Random Access Memory. It is a read/write memory. It is volatile memory i.e. the stored data will be lost after the computer is turned off. It is used for storing data and instructions while they are being processed by CPU, waiting to be processed and the result after processing before it is provided to output device. Types of RAM are:

- S-RAM (Static-random access memory)
In this RAM the stored data will not be lost till the computer is in “on” state. It is expensive but faster for read/write than D-RAM.

- D-RAM (Dynamic-random access memory)
In this RAM the stored data will be lost after a few milliseconds even if the computer is in “on” state. So, to prevent data loss refreshing circuit is required. It is cheaper but slower for read/write than S-RAM.

2. ROM
It stands for Read Only Memory. It is non-volatile memory i.e. the stored programs will not be lost after the computer is turned “off”. It is used for storing programs required for operating electronic devices. It is usually cheaper and used in smaller storage capacity than RAM. Types of ROM are:

Cache memory is a high speed memory placed in between CPU and RAM. It is used for increasing the overall operating speed of the computer. It balances the difference in operating speed of RAM and CPU. It is 5-10 times faster than RAM. It stores data and instructions which are frequently required by CPU. When CPU requires any data it searches the data in Cache and if not found it searches in RAM. The condition in which CPU finds data in Cache is known as hit and if not found the condition is known as miss. The ratio of hit and miss in present computer is 9:1. Cache is further divided into L1 Cache and L2 Cache. L1 Cache contains more frequently required data compared to L2 Cache. 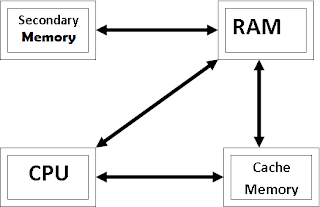 Once suspended, computer-notes will not be able to comment or publish posts until their suspension is removed.

Once unsuspended, computer-notes will be able to comment and publish posts again.

Once unpublished, all posts by computer-notes will become hidden and only accessible to themselves.

If computer-notes is not suspended, they can still re-publish their posts from their dashboard.

Once unpublished, this post will become invisible to the public and only accessible to Computer 11 Notes.

Thanks for keeping TyroCity safe. Here is what you can do to flag computer-notes:

Unflagging computer-notes will restore default visibility to their posts.